One of the New 7 Wonders of the World, it is without doubt Jordan’s most valuable treasure and the greatest tourist attraction. It is a vast, unique city, carved into the sheer rock face by the Nabataeans, an industrious Arab civilization who settled here more than 2000 years ago, turning it into an important junction for the silk, spice and other trade routes that linked China, India, and southern Arabia with Egypt, Syria, Greece, and Rome.

The Nabataean Kingdom existed for centuries, and Petra became widely admired for its refined culture, massive architecture and ingenious complex of dams and water channels. Ultimately, however, the Roman Emperor Trajan annexed the Kingdom.

By the 14th century, Petra was completely lost to the West, and so it remained for almost 300 years. Then in 1812, a Swiss traveler, Johann Ludwig Burckhardt persuaded his guide to take him to the site of the rumored lost city. Secretly making notes and sketches, he wrote, “It seems very probable that the ruins at Wadi Musa are those of the ancient Petra".

In order to preserve Petra, now a UNESCO World Heritage Site, all tourists’ facilities have been located in the town of Wadi Musa, next to the entrance of the site.

The main attraction of Petra is naturally the city itself. A one-day visit is an absolute minimum, and a week will still leave many areas unexplored. Maps and excellent guidebooks are for sale at the entrance of the Petra site, and tour guides are available to take you through the ancient city. 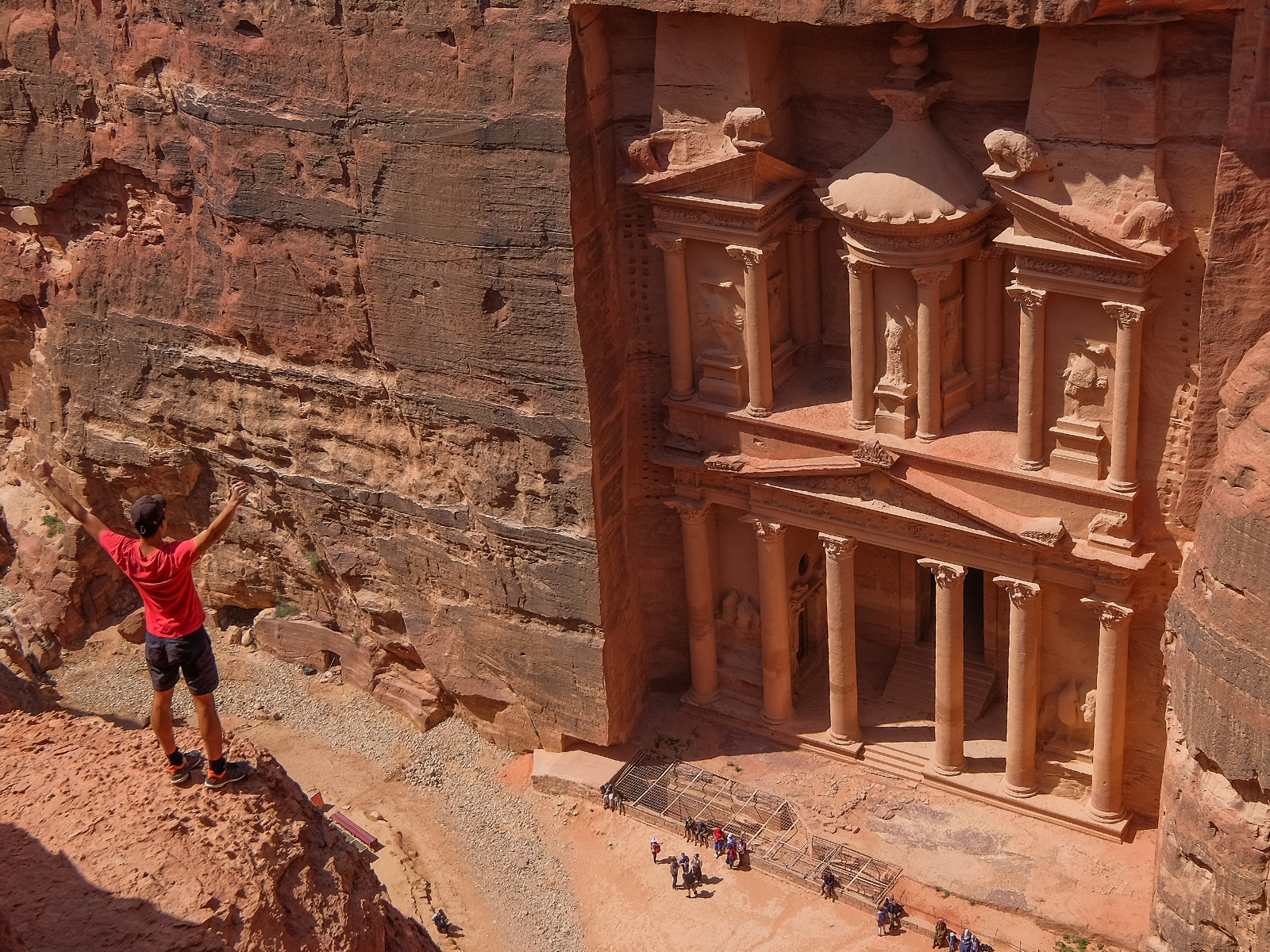 The Treasury of Petra from Above

You can hire a horse or horse-drawn carriages to take you from the main entrance through The Siq to The Treasury. For elderly and handicapped tourists, the Visitors Center can issue a special permit for an extra fee, so that the carriages can go inside Petra itself to its main attractions. After you have passed The Siq, once inside the actual city, hire a donkey or, for the more adventurous, be led on camelback - it is easier than you may think, and surprisingly comfortable! Remember to use caution, as the Petra site is large and can involve some fairly steep climbs!

Petra’s most famous monument, the Treasury or Al-Khazneh, appears dramatically at the end of The Siq. Used in the final sequence of the film Indiana Jones and the Last Crusade, this towering façade is only the first of Petra’s secrets.

Various walks and climbs reveal hundreds of rock carved tombs and temple façades, funerary halls and rock reliefs - enough to keep you here for many days. You will find a 3000-seat theater from the early 1st century AD, a Palace Tomb in the Roman style, and Qasr Al-Bint, the only freestanding building that survived in this ancient city.

A climb of over 900 rock-cut stairs will bring you to many visitors’ highlight - a gigantic 1st century Ad Deir (The Monastery).

A modest shrine commemorating the death of Aaron, brother of Moses, was built in the 13th century by the Mameluke Sultan, high atop Mount Aaron (Jabal Haroun) in the Sharah mountain range.

These sights are at their best in early morning and late afternoon, when the sun confers warm tones to the multicolored stone and you can view the majesty of Petra as Burckhardt saw it in 1812. Another way to see Petra as well as to experience the Bedouin culture of the region is to attend the Petra by Night experience late after the sun has set.

Another worthwhile sight include the Petra Archaeological Museum, inside the site, which houses a wide variety of finds from Petra and the Petra Nabataean Museum.

An extensive range of accommodation to suit all budgets is available in and around the town of Wadi Musa, just outside the site of Petra, including excellent 5 and 4 star hotels. It is always advisable to pre-book accommodation.

Local hotels have delicious international restaurants. Inside the town are several restaurants which serve traditional cuisine, as well as several fast food outlets. 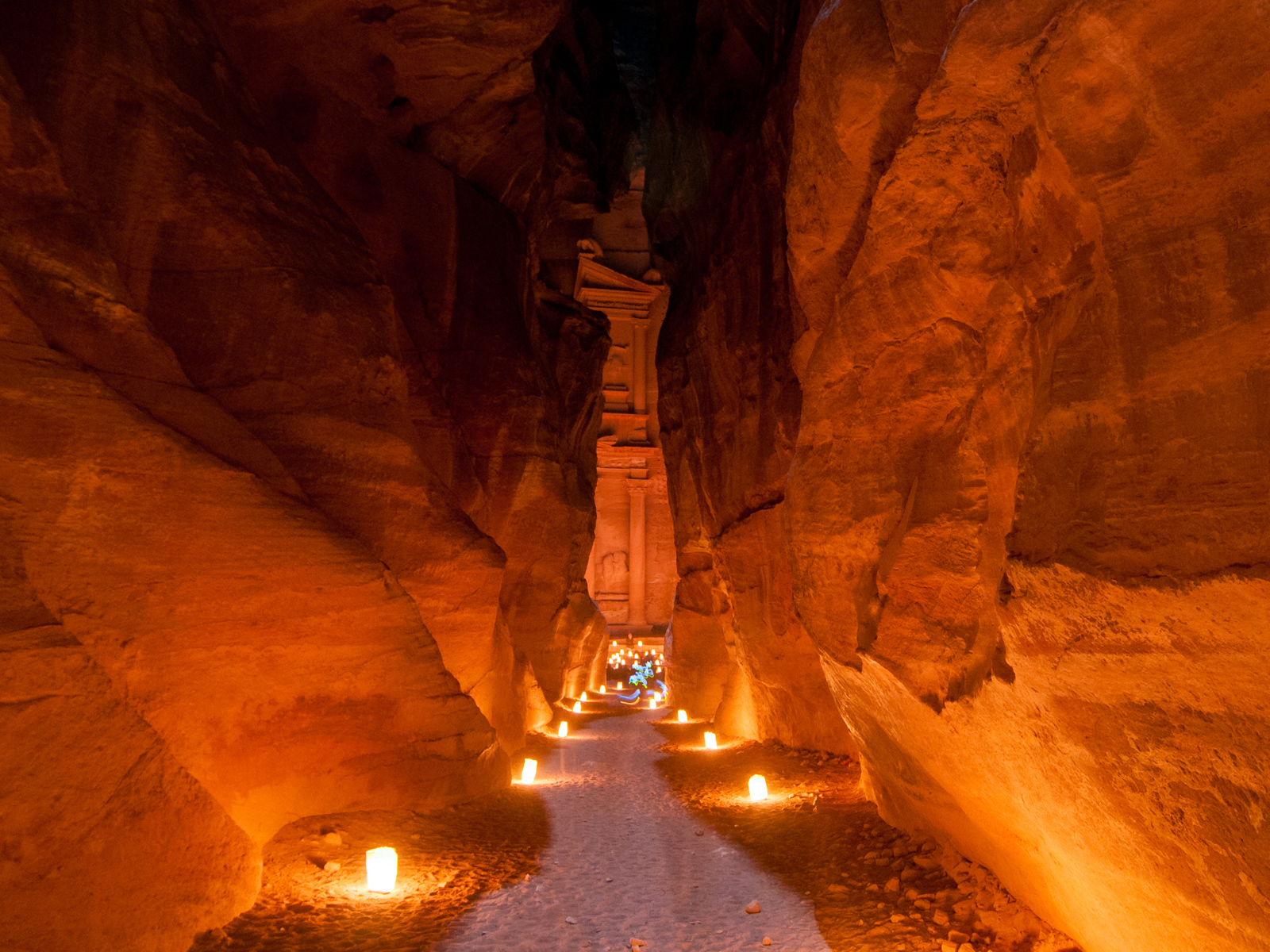 The Siq at Night, Petra

Apart from the artisans stalls inside the Petra site, there are many shops in Wadi Musa that sell local products, such as Nabataean-style pottery, silverware and beadwork jewelry. These are mainly produced locally by the Bedouin people.

Just outside the center of Wadi Musa is a silver workshop, where local women make a delightful array of silver jewelry pieces, which are sold in several local shops.

The best time to see Petra is in the early morning or late afternoon, so plan for an early start, or arrive the evening before and stay in one of the comfortable hotels near the site. Petra is a 3-hour drive south from Amman on the modern Desert Highway, or 5 hours on the more scenic Kings’ Highway. Leave Amman from the 7th Circle and follow the brown signs.