The site of John the Baptist's settlement at Bethany Beyond the Jordan, where Jesus was baptised, has long been known from the Bible and from Byzantine and medieval texts. The actual site has now been identified as the site that extends between Tell al-Kharrar (Elijah's Hill / Tall Mar Elias in Arabic) and John the Baptist Church area, on the east bank of the Jordan River in the Hashemite Kingdom of Jordan.

Tell al-Kharrar is the same place from which Elijah is believed to have ascended to heaven in a whirlwind on a chariot of fire. Wadi al-Kharrar is believed to be Kerith Ravine, the natural stream "east of the Jordan" where God commanded Elijah to seek refuge from King Ahab and Queen Jezebel.

At the time it was appropriate for John the Baptist to begin his mission from the same place that Elijah had ended his life, as both of these leading Biblical prophets played similar theological roles: they both confronted the religious laxity of their times, challenged political authority, announced the imminent arrival of the Messiah, and urged the populace to repent and lead righteous lives.

For almost two millennia, this area which extends along the east bank of the Jordan River, opposite Jericho, has been known to be the place where Jesus Christ was baptized by John. But, in 1996, stunning archaeological discoveries identified the exact site where John had been living and carrying out his baptisms, as Bethany Beyond the Jordan. The Bible (John 10:40) refers to this place when, after being threatened with stoning in Jerusalem "Jesus went back across the Jordan to the place where John had been baptizing in the early days". 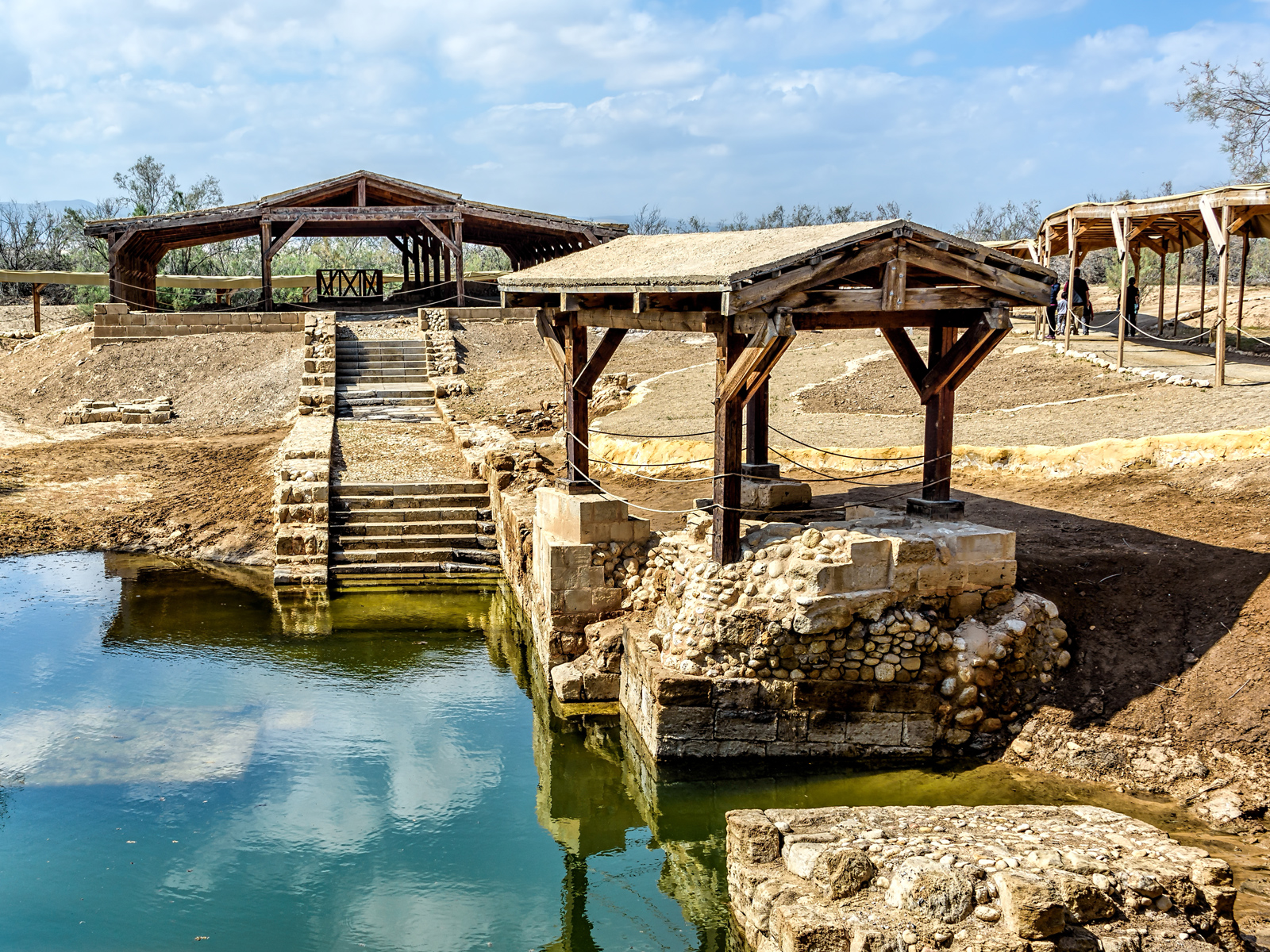 Though Jesus Christ's divinely inspired role was announced before and during his birth, he actually launched his public ministry at Bethany Beyond the Jordan at the age of 30, immediately after he was baptized by John and anointed by God. Several events took place during this three-day stay at Bethany: It was here that Jesus first prayed to God and it was here that he gathered his first disciples – Simon, Peter, Andrew, Philip, and Nathaneal. Pottery, coins, stone objects, and architectural remains confirm the site was used in the early 1st century AD, during the time of Jesus and John.

The extensive architectural remains, which can be seen on "Elijah's Hill" are from the 5th – 6th century Byzantine monastery and contain churches and chapels, baptism and water storage pools, and water systems. The 3rd century Roman building with fine mosaics is believed to be an early Christian ‘Prayer Hall' – probably the earliest building, for this specific use, to have been identified anywhere in the world. Also identified is the cave where John the Baptist lived and carried out his works. Early pilgrims noted that water flowed from the cave, which John drank and used for baptisms. The cave was transformed into a church during the Byzantine period (early 4th to early 7th centuries AD). The water channel and the church, which is built around the cave, have been recently excavated.

Take the Dead Sea Highway, when you reach the Suwaymeh Intersection take a right turn northbound, following the signs to the site. Bethany is around 45 minutes away from Amman.